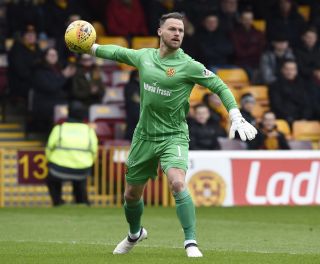 A 1-0 defeat against Ross County in an empty ground in Dingwall on a Monday night would not normally live long in the memory but Motherwell goalkeeper Trevor Carson has vowed to soak up every experience after 21 months out.

The Northern Ireland international this week made his first appearance since suffering deep vein thrombosis on his way back from representing Northern Ireland against Austria in November 2018.

Carson’s career was on the line but his comeback proved elusive after getting the all-clear.

The former Hartlepool keeper lost his Motherwell place to Mark Gillespie and then the coronavirus lockdown scuppered a promise from manager Stephen Robinson to play him before the end of last season.

Gillespie’s exit to Newcastle has given Carson the chance to rediscover the form which saw him the subject of a bid from Celtic in January 2018.

Carson made a good start personally on Monday – making some impressive early saves before conceding from a penalty and then having little to do.

Ahead of Saturday’s Scottish Premiership clash with Dundee United, he said: “I’m not one for getting nervous going into games but Monday was a different feeling. I had different emotions, maybe overthinking things because I haven’t played for so long.

“But I will come on leaps and bounds just getting that one out the way. You have little doubts: ‘Can I still do it? Will I be able to perform at the same level?’

“Obviously the result was disappointing but on a personal note the game did me the world of good and I know I will kick on from there.

“It was just a shame there were no fans there because that’s the one thing you pinch yourself. I have played in front of 50,000 at Hampden and don’t really take it in at the time. But since what I have been through I am going to take in every experience, every atmosphere now, because I can’t even remember my international debut. It’s something I dreamed of as a kid and I have no recollection of it.

“I have promised myself I am going to start taking things in because we are very fortunate with the job we have got and the experiences we get. That’s one thing I will take out of it.”

Carson described his long spell out as a “rollercoaster but mainly with downs”.

When asked what kept him going, he said: “Just the love for football. Since I was four or five, all I wanted to be was a footballer. Don’t get me wrong, there were testing days, the gaffer will tell you there were days where he had to pick me up.  I’ve been used to being a number one-goalkeeper since I was maybe 20.

“But we are very lucky to have the job we have, there were days where I just had to give myself a shake and realise how fortunate we all are.

“That’s what keeps me going, and my family keeps me going. I have a great family circle around me and I want to make my kids proud so I have to give my all.”

Carson admits being called up for Northern Ireland during his spell on the Fir Park bench was a “massive boost” and he now aims to reclaim his place in the team.

“Sometimes you need a reminder because you can start having doubts,” he said. “Football is a ruthless game and you are quickly forgotten about.

“It was a big boost but Motherwell is my bread and butter and I got more satisfaction out of playing on Monday night. But hopefully that will lead to further call-ups and more involvement.

“I’m 32 now and I have enough experience behind me that I can put a claim down to play. I can’t control what the other goalies are doing but it’s in my hands and hopefully I can make the most of it.”