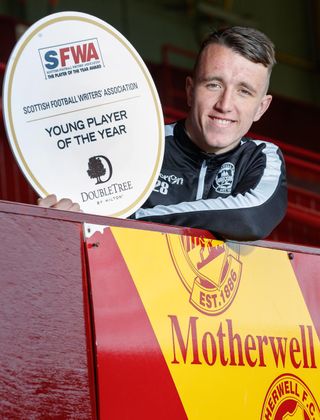 The highest bid was £2million for the 19-year-old midfielder who is the Scottish Football Writers’ Young Player of the Year.

Motherwell, however, are sticking to their guns for a £3million package for their academy graduate.

Both clubs are believed to still be talking with the Fir Park outfit.

Responding previously to speculation, Well chief executive Alan Burrows stressed that any potential suitors for Turnbull will have to come up with a fee in excess of the record  £1.75million they received in 1994 when Phil O’Donnell moved to Celtic Park.

Posting on Twitter, Burrows said: “Getting some questions re David Turnbull, given today’s newspaper report.

“I try not to reply to speculation (for obvious reasons), but to reiterate what I’ve already gone on public record as saying. We will only consider offers of significantly more than our record fee received.”

Turnbull burst into Stephen Robinson’s first team in the early part of last season, scoring 15 goals in 30 league appearances for the Lanarkshire side.

He was rewarded with a new deal, tying him to Fir Park until the summer of 2021.

He was also shortlisted for the Professional Footballers’ Association Scotland Young Player of the Year award.