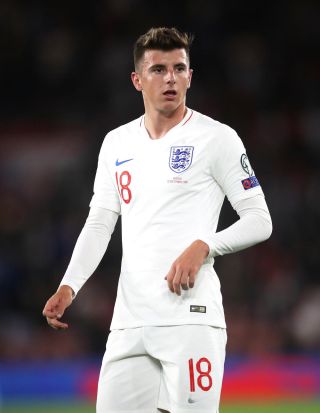 Mason Mount admits things could get “heated” when England players face off in big club encounters but insists the camp will remain united moving forward.

The Three Lions recovered from a tumultuous start to the week to thrash Montenegro and Kosovo to seal qualification as group winners and a place among the six top seeds for Euro 2020.

A 7-0 home win over Montenegro was followed up by a 4-0 victory in Pristina on Sunday evening, with Raheem Sterling’s physical alteration with Joe Gomez at the start of the week well and truly put to bed by the players.

Such a special feeling to score my first goal for @England and a great way to end the qualifying campaign. Big summer ahead! ❤️🦁 #EURO2020#ThreeLionspic.twitter.com/TmvN7hwQzq— Mason Mount (@masonmount_10) November 17, 2019

Sterling was not considered for selection for the first of the two final Group A qualifiers as a result of a fracas with Gomez a day on from the pair clashing on the pitch during Liverpool’s 3-1 win over Premier League title rivals Manchester City.

Chelsea midfielder Mount feels such on-field battles will continue as England’s players meet in crunch fixtures before the next Three Lions game in March, but says any incidents will not spill over into the international camps.

“I think it is going to get heated in club games because there are going to be massive games,” he told BBC Sport.

“But we are very tight as a group, things get sorted out very quickly like they did and then we get focused on the games.

“It was very strong performances in both games, we won the group and that was the main achievement.

“I think the two games have been very professional performances and to finish it off with a good win is good and there is a big break now until the next camp.

“We go back to our clubs and we are all going to be playing against each other but it has been a very good qualification, we have got some very good wins under our belt and the focus now is on March.”

Mount became the youngest Chelsea player since Jimmy Greaves to score for England as he opened his international account with the final goal in Kosovo.

“In the last game I had a couple of chances when I didn’t score,” he said.

“So coming onto the pitch and knowing that I can make an impact and get onto the scoresheet, that was on my mind.

“I was obviously very, very happy with that opportunity and very proud to score my first goal.”

After England’s black players were racially abused in recent away trips to Montenegro and Bulgaria, there was a completely different feel in Kosovo as the locals welcomed fans and players alike.

The warm reception stemmed from Britain’s support offered to the country during their battle for independence and Mount was pleased with a different kind of greeting.

“It was very refreshing,” he added.

“We know what happened in Bulgaria but this was the total opposite.

“It is very rare you come away from home and get that support from away fans – for me, being a young player and being around that atmosphere, it was brilliant.

“We spoke a bit about it before the game and we knew what the atmosphere was going to be like, obviously the game was good and it went really well for us.

“But I think it was more than just a football game, obviously us coming together and the support they showed us throughout the game.

“During the national anthems they were holding up the England flags so it was brilliant for us to be in the stadium and around that atmosphere to learn so much – it was a top night.”