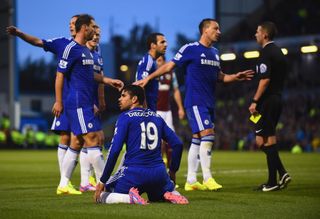 Costa equalised for the London club in their 3-1 win at Burnley on Monday, the Spaniard sweeping in to finish after Branislav Ivanovic's dangerous cross came back off the post.

Mourinho said Costa - who was cautioned in the 31st minute at Turf Moor for simulation - was frustrated despite his scoring start, and will take time to adjust to the disciplinary demands of the English top flight.

"Costa last season had a fantastic season and I think in the Spanish League he got five or six yellow cards during all season," Mourinho said post-match.

"The kid presents himself with a fantastic attitude, a competitive attitude, very clean and polite.

"He has a clear penalty - then no penalty and a yellow card. The kid was obviously frustrated.

"So I hope it doesn't get [him] more unfair decisions."

The big talking point for Chelsea in the close-season was the goalkeeping position, with returning Thibaut Courtois getting the nod for their opener over long-time custodian Petr Cech.

But Mourinho continued to stress there was no clear-cut number one, with Courtois' sheet marked within 14 minutes on Monday.

"I don't like that word 'for the rest of the season'," Mourinho replied, when asked if the Belgian had secured the number one spot this term.

"I think today he played a game good enough to be my first choice for the next game but when you have someone on your side - a top professional - someone like Petr and you don't perform, you are in trouble.

"They are both fantastic goalkeepers."