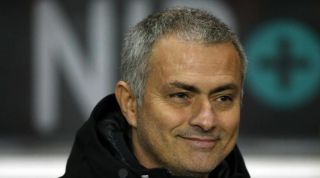 Liverpool now lead Chelsea by just two points, with the third-placed Manchester City - who have a game in hand on both of their rivals - a point further adrift.

Chelsea were happy to sit back and hit Liverpool on the counter-attack throughout Sunday's match, a tactic that irritated the hosts, who had their 25-game scoring streak in the league ended.

But Mourinho - who also said captain John Terry "has a chance" of being fit for Wednesday's UEFA Champions League semi-final second leg with Atletico Madrid - defended his side's tactics, which saw Liverpool frustrated at perceived time-wasting from the visitors.

"The best team won," said Mourinho. "The team that deserved to win, won. Simple, in my opinion.

"The team played brilliantly, every player was magnificent, no mistakes. I think it was a fantastic performance by my players.

"Time wasting? What's that? You never spoke about this when we play lots of matches during the season and now you are speaking about it, only today you were aware of that."

Despite the win, Mourinho does not believe his team can win the Premier League, saying there was "no chance" they could claim the title for the first time since 2010.

"We have no chance," he added.

"We were waiting for this match to be the title match, we were speaking about it for a long time but for some reason this match didn't become the title match so today was three important points and we need one more to finish third.

"If we finish third we are in the Champions League automatically but we can say we won both matches against Liverpool and Man City."