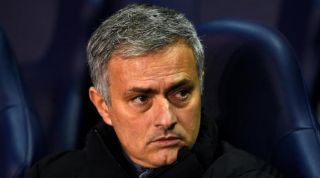 Chelsea boss Jose Mourinho has joked that he could try and sign Steven Gerrard once the veteran leaves Liverpool.

The Liverpool captain - who nearly joined Chelsea in 2005 - will end an association of more than 20 years at Anfield when he joins the Los Angeles Galaxy later this year.

By doing so, the ex-England skipper will follow in the footsteps of Frank Lampard - the Chelsea legend who left for MLS outfit New York City last year.

Chelsea's Premier League rivals, Manchester City - who own New York City - swooped to sign Lampard on loan and the midfielder has been an excellent addition for Manuel Pellegrini's side.

And after Liverpool's 1-1 draw with Chelsea in the first leg of their League Cup semi-final on Tuesday, Mourinho was quizzed about Gerrard's departure.

When asked if he would try and convince Gerrard to remain in England, Mourinho told the BBC: "Or to get him on loan."

He added: "I'm not happy he leaves [England]. I would love the Premier League to keep always the best players.

"I think he has more than enough quality to play in the Premier League.

"In spite [of the fact] he's my opponent, I feel sorry that he's leaving."