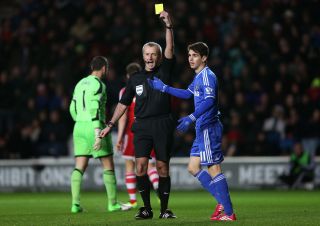 Mourinho's men won their third Premier League match in a row thanks to second-half goals from Fernando Torres, Willian and Oscar.

Oscar thought he should have been given a penalty in the 55th minute after a minor collision with Southampton goalkeeper Kelvin Davis when he was sent through on goal.

But referee Martin Atkinson booked the Brazilian and replays showed it was the correct decision, with the Chelsea player looking for contact and leaving a leg in during his attempt to round Davis.

Oscar threw himself to ground and was promptly booked, with Mourinho telling BT Sport that the card was fully deserved.

"I think it is a situation where he can score, and he was trying to play safe, and safe is to wait for the contact of the goalkeeper," Mourinho said.

"If there is contact in this situation, it is a red card, it is a penalty, we score, they are down to 10 men.

"Normally in these situations, the contact arrives. In this instance, it didn't arrive. I think it was a good decision by Atkinson and a yellow card that should be showed more often in this country.

"I'm happy that happens (that Oscar was booked). Oscar is a clean boy and he is clearly waiting for the contact from the keeper.

"Atkinson did very, very well. And I told already Oscar that the yellow card is very much deserved.

"Oscar deserved the card today but he is a very fair player."

Oscar was impressive apart from his dive though, and his introduction and that of fellow substitute Willian did help swing the game Chelsea's way.

When asked to reflect on the victory, Mourinho was delighted, as Chelsea continued their fine form during a hectic period.

He added: "The team was able to come here without (Frank) Lampard, without David (Luiz)…we managed to come here and get three very important points against a team with a very good coach and a very good football philosophy."