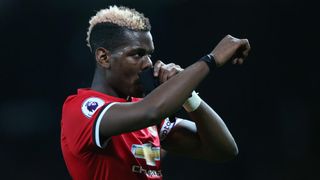 Jose Mourinho has suggested Paul Scholes' recent criticism of Manchester United's Paul Pogba could be due to jealousy over the amount of money the France international earns.

Scholes, who played 718 times for United between 1993 and 2013, was critical of Pogba after the club's 0-0 draw with Southampton, claiming he is not the same player he was at Juventus.

The 43-year-old feels Pogba has not shown his best form regularly enough since returning to United, though he went on to play a starring role in Monday's 2-0 win over Everton.

Pogba set up both goals as Anthony Martial and Jesse Lingard secured victory and Mourinho came out in defence of his midfielder, while also biting back at Scholes.

A storming performance capped off with  assists.Tonight's Man of the Match is ! January 1, 2018

"I think the only thing Paul Scholes does is to criticise, which is a different thing," Mourinho told reporters.

"Paul [Pogba] tries to do his best all the time and sometimes he plays very well. Sometimes he doesn't play so well.

"It's not Paul's fault that he made much more money than Paul Scholes. It's not Paul Pogba's fault, it's just the way football is.

"Every day I try to do my best. If one day Paul [Scholes] decides to be a manager, I wish he can be 25 per cent as susccessful as myself. Fifty per cent is 12-and-a-half silverware, 25 per cent is around six [trophies]. If he is 25 per cent he will be quite happy.

"I think they [former United players working as pundits] would love to be here, in the club. That's a problem that I cannot resolve."