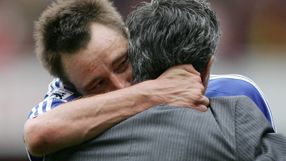 Terry will not only captain the side for England’s Euro 2012 qualifier against Wales on March 26, but on a permanent basis, with Ferdinand missing out this weekend’s game at Millennium Stadium with a calf injury.

The Real Madrid boss, who won two Premier League titles, an FA Cup and a League Cup at Chelsea, has stated how the Chelsea skipper was ‘fantastic’ to work with and the ‘perfect’ captain.

“John Terry was the perfect captain for me, that’s the only thing I can say," he told talkSPORT.

“They have in Fabio [Capello] a very experienced manager who makes those decisions and the only thing I can say is that John [Terry] was a fantastic captain for me.”

The captaincy issue has been a hot topic of discussion in the British media this week and while Mourinho admits he has never worked with Ferdinand, he recognises that the Manchester United man is also a ‘great’ leader.

“I’ve never worked with Rio. I’ve never had the pleasure but my feeling and understanding from the outside is that he is a great captain too,” added Mourinho.