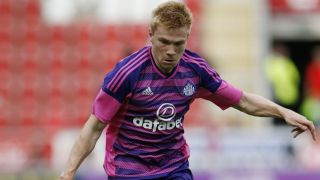 Duncan Watmore scored a brace of first-half penalties to give Sunderland a 2-0 win over Stade Nyonnais in David Moyes' first match at the helm.

Former Everton and Manchester United manager Moyes was confirmed as Sam Allardyce's successor at the Stadium of Light on Saturday and had a watching brief for the 2-1 win at Rotherham United later that day.

Moyes took charge of a more youthful line-up two days on at the Stade Camille-Fournier – the first of three matches slated for a week-long stay in France.

The much-changed XI still had more than enough to see off their limited third-tier Swiss opponents.

SNAPSHOT: Duncan Watmore is congratulated by the Lads after scoring July 25, 2016

Watmore had a driving run ended illegally by Oliver Maric and sent a 38th-minute penalty beyond Osni Mutombo's despairing dive.

Mutombo was sent the wrong way on the stroke of half-time as George Honeyman became the latest man to benefit from clumsy defending.

Nyonnais improved after the break but could not find a way back into the contest, as trialist Charles N'Zogbia made another appearance for Sunderland.

Elsewhere, Crystal Palace claimed a 1-0 win at League Two Colchester United thanks to a fine strike from Jordon Mutch.

Jason Puncheon collected Connor Wickham's ninth-minute pass and laid it off for Mutch to side-foot home via the underside of the crossbar.