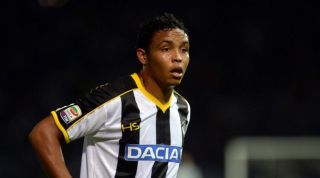 The Colombian striker moved to Sampdoria in January after overcoming concerns over his fitness prior to the completion of the deal.

He has yet to make his Samp debut but already feels at home, giving particular praise to the welcome he has received from his new head coach Mihajlovic.and also president Massimo Ferrero after struggling at Udinese.

"I wanted at all costs to come to Genoa," he told the Gazzetta dello Sport. "If things had fallen through, I used to think it would be the end of me, that I wouldn't make it in Udine.

"Ferrero didn't know me, but he showed me affection right off the bat. And Mihajlovic showed me how much he cared for me from the first meeting.

"After a year-and-a-half in which you're not doing very well, finding a coach who really believes in you is fundamental."

Muriel has struggled to replicate the form he showed in the 2012-13 season when he netted 11 Serie A goals, a dip in form that he blames on the coaching staff.

"They started asking things that they didn't require of me before, like running after everyone," he added.

"That was the role of Alexis Sanchez, who did that well. But I didn't have the same characteristics, so I struggled a lot.

"I was no longer thinking straight, so it was time to find a new scene and start again."