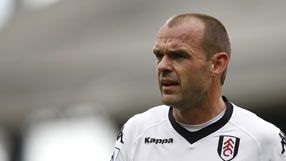 Fulham currently find themselves lying 13th in the Premier League, and to leave with any points from the home of their local rivals will serve as a great kick start for their season.

In an interview with Absolute Radio, the former England international joked: “Yeah, just what you need, a nice easy game away at Chelsea after a tough game against Villa at the weekend.

“But it’s a big game for us because obviously they’re our local rivals and whenever you play Chelsea it’s tough, but we’ll go there and give it a go. You’ve got nothing to lose, no one expects you to get anything when you go to Chelsea, so we can play with a nice freedom.”

When asked about how he thought the game would pan out, the 33 year-old said: “Well if I’m honest, if you offer me a draw I’ll take it now. It’s a tough game, Chelsea, and just to rub salt on the wounds they’ve gone up to Liverpool and got beaten at the weekend so they’re going to be a bit wounded.”

Since joining Fulham from Spurs in 2007, Murphy has gone from strength to strength and now captains the London side.

After striking up a good relationship with former manager Roy Hodgson, he also seems to enjoy the presence of his new boss Mark Hughes.

He said: “Do you know what, he looks quite a disciplinarian, the gaffer, but he’s actually pretty chilled out, he’s pretty calm and cool. He likes things done his way but he’s alright.”

However, despite getting on well with him, Murphy jokes that he won’t be buying his manager a Christmas present this year.

“Can you imagine the amount of stick I’d get if I got the gaffer a present? He’ll be happy with three points.”

Listen to Newcastle vs Fulham this Saturday November 13 on Absolute Radio extra - on DAB Digital Radio, 1215AM and online in the UK from 1.30pm. For more visit www.absoluteradio.co.uk