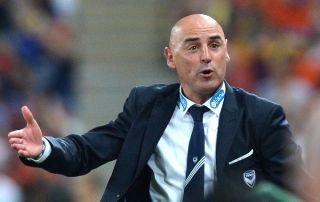 The Victory went down 1-0 to the Brisbane Roar thanks to a Besart Berisha goal, and coach Muscat unleashed a tirade at the officials after the match, saying a late Matt Smith challenge on Mark Milligan should have resulted in a spot kick.

The Roar looked to be holding on to their narrow lead with relative ease until an attacking barrage from the Melbourne side in injury time had them panicking at the back.

Goalkeeper Michael Theo was forced to make a number of spectacular saves, and Smith appeared to make contact with Milligan as the midfielder took the ball deep into the Brisbane area.

The Victory were on the wrong side of another controversial call during the week which saw them crash out of the AFC Champions League after drawing with Jeonbuk Motors, and Muscat expressed a deep dissatisfaction at what he felt was another unjust decision.

"At this level, to be so distanced from the game, and to get such a big decision wrong, we really have to analyse, and the FFA should really look into how we get this better, because from my perspective the referees need to be full-time if we're to be taken seriously.

"Because to make a simple decision, and get that wrong, and there's four of them out there... and that's why it's hard to take, because the players have put in an extreme amount over the last six or seven weeks, and I couldn't be any prouder.

"And for all that, in the space of five days, for an official to dictate the result of a game is embarrassing.

"It's hard to take, and I haven't got any words for the players at this point in time, because they've given absolutely everything for this football club, and unfortunately the result was taken out of their hands by an official's decision."

Muscat went on to hint that Delovski would not be entrusted to handle the Grand Final after his performance on Sunday night.

"I suppose the one decision that (he) had to get right tonight was missed.

"We won't be the only ones not in the Grand Final next week, because surely he can't be in the final, missing decisions like that.

"From where I was it looked like he put the whistle to his mouth, then basically bottled it.

"Big crowd, home team, and he bottled it.

"He told Mark Milligan he didn't think there was any contact.

"He's probably not paid to think, he's paid to get the decisions right."