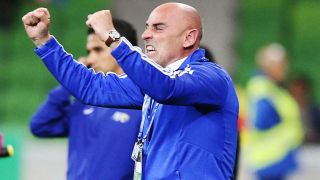 Melbourne Victory head coach Kevin Muscat has signed a contract extension with the A-League giants, it was announced on Thursday.

Muscat – who was out of contract at the end of the 2017-18 campaign – has re-signed for a further two seasons.

This season, however, has proven the most difficult of Muscat's tenure, though Victory are amid a four-match unbeaten run in all competitions to be fourth in the A-League and in contention to reach the AFC Champions League knockout round.

"I'm obviously very pleased to be able to lead the club for a further two seasons and I'm honoured the board has given me that opportunity," he said.

"I'm excited about what is ahead and can assure our members and fans that we will continually be looking at ways to deliver the best outcomes for the club.

"My mind is on the here and now, to deliver the best results in the two competitions we're involved in. The standards at this club are extremely high and we will be looking to deliver success this year."

Muscat's men are level on points with second-placed Ulsan Hyundai in Group F with two matches remaining, while Victory are a point adrift of rivals Melbourne City – third in the table – ahead of their clash with lowly Central Coast Mariners on Sunday.

"Kevin has shown that he's an excellent coach and we're delighted to secure him for the next two seasons," said Victory chairman Anthony Di Pietro. "This process involved a considered review of the football department, to ascertain ways in which we can not only improve, but also deliver better outcomes and give us the best chance to achieve sustained success.

"We identified that we would benefit from an increased level of support around the head coach, to enable an even more targeted and focused approach to list management and recruitment, as well as increasing integration between our youth and senior programs.

"We will be looking to add resources around Kevin and we will keep our members and fans informed as this unfolds. In the interim though, our focus is on achieving the best results in the A-League and Champions League."