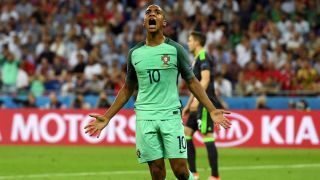 Joao Mario claims he is paying no heed to the reports linking him with a move to Inter as Portugal prepare for the final of Euro 2016 against France.

The Sporting Lisbon midfielder has been heavily tipped to join the Nerazzurri ahead of the 2016-17 campaign.

But first he has the small matter of a European Championship decider against the hosts in Paris on Sunday to contend with.

And the 23-year-old is not going to let the prospect of a switch to Serie A at club level distract him from the task at hand.

"[It's] two days away from playing a final - my only focus is on playing this final," he said.

"My future is only two days - to the European Championship final."

Some observers do not consider Portugal worthy finalists after struggling in the group stage, before seeing off Croatia, Poland and Wales to reach the decider.

But Joao Mario is not interested in attacks on the team's style, crediting head coach Fernando Santos with instilling the spirit that has carried the squad this far.

"Critics are a part of football," he said.

"We don't care about them. We don't want to win to have our revenge, we want to win for the fans.

"The key is believing, [to] never stop believing, correcting mistakes, keeping strong, [staying] together even in the not so good moments, like in [the] group stage.

"Keeping solid, we were very happy to qualify. We believe in our colleagues next to us - this is the spirit that brought us here."