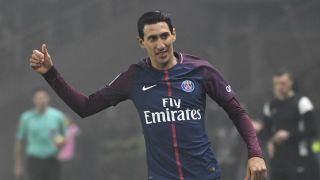 Angel Di Maria's goal was enough for a 1-0 Paris Saint-Germain win at Nantes but he also had the misfortune of producing one of the misses of the season.

Unai Emery's men now sit 11 points clear at the top of the table and made light of Neymar's absence due to a rib injury by finding an early opener.

Edinson Cavani, back in the side following his unauthorised late return from holiday, laid on the chance for Di Maria, who made no mistake – although the same could not be said when he blazed off target from six yards.

The ex-Real Madrid man and his colleagues were grateful when Emiliano Sala had a header ruled out. Two Nantes players were in offside positions but not involved when a seemingly onside Sala converted.

Claudio Ranieri was entitled to feel aggrieved and his fifth-placed side finished the match with 10 men when Diego Carlos was sent off in bizarre circumstances.

The defender collided with referee Tony Chapron as he charged forward on the break, with the official falling to the ground and appearing to kick out in frustration at Carlos, before regaining his footing and dishing out a second booking for apparent dissent.

Both sides looked sharp and inventive during the opening stages but PSG drew first blood in the 12th minute, with Cavani making his presence felt on his comeback.

The Uruguay striker aimed a precise pass in Di Maria's direction and Kylian Mbappe's exquisite dummy scrambled a Nantes defence appealing in vain for offside, leaving the Argentina midfielder to slot home his seventh goal of the season.

Nantes were largely restricted to speculative attempts – none more so that Andrei Girotto's bolt strike from the halfway line, with the execution falling some way short of the ambition.

Di Maria was at the heart of most of PSG's best work but he endured a moment to forget eight minutes before the interval.

Marco Verratti, Mbappe and Adrien Rabiot all combined on a lightning break, only for Di Maria to inexplicably hit the top of the crossbar with the goal at his mercy.

The 29-year-old was soon back in the thick of the action, knocking a cross down for Giovani Lo Celso, who had a rasping shot bravely blocked.

Carlos flicked a searching cross from captain Leo Dubois just wide early in the second half as Nantes resumed with renewed ambition.

Pinning PSG back did leave the hosts vulnerable on the counter-attack and Mbappe offered a demonstration of his blistering pace down the right in the 56th minute, only for Di Maria's finish to let him down again – albeit less spectacularly.

Sala thought he had drawn Nantes level with an hour played but his header from Dubois' free-kick was ruled out for offside, even though he appeared to be level with Cavani.

Emery elected to end Cavani's reintroduction in the 68th minute, sending on Thomas Meunier for a touch more defensive insurance.

Meunier's fellow full-back Layvin Kurzawa smashed a volley wide in an attempt to make the point safe, while Ciprian Tatarusanu produced a superb reaction save to deny Mbappe the goal his efforts merited.

Nantes' final push for a share of the spoils was checked by Carlos being on the end of some rough justice. Rabiot then struck the post before boos rained down when the final whistle was sounded by Chapron - a man who had unsatisfactorily made himself the centre of attention.