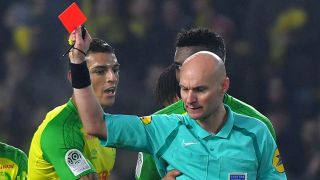 Nantes defender Diego Carlos is pleased his suspension has been lifted following what he branded a "historic" clash with referee Tony Chapron.

Diego Carlos tangled legs with the official, who went tumbling to the turf during second-half stoppage time in Nantes' 1-0 defeat to Ligue 1 leaders Paris Saint-Germain on Sunday.

Chapron responded by aiming a kick at the right leg of the 24-year-old, whose reaction earned him a second yellow card.

The dismissal was overturned by the French Professional Football League (LFP), making Diego Carlos available to face Toulouse on Wednesday, while the referee was handed an indefinite suspension by the French Football Federation and is set to face a disciplinary hearing.

The Brazilian is pleased he will not miss any time on the pitch following the episode and is keen to move on, saying the outcome for Chapron is "not my problem".

"Usually the player is the one hitting the referee. Then you're suspended a consequent number of games. That's what every player will say. This time the opposite happened. It's the referee who hit a player," said Diego Carlos

"Everything that happened afterwards was dealt with in a good way, if you're asking me. The yellow then the red card were overturned. He's been suspended but that's not my problem. I'm very pleased to be able to join the team again.

"What happened is historic in my opinion. That's why a lot of people are talking about it."

Diego Carlos offered his account of the bizarre events, which seemingly left players on both sides baffled.

He said: "It's him who cut me up when he changed his run. He fell and I looked at him when he kicked my leg. I asked, 'What are you doing?'

"Then he came back to me and gave me a yellow card then a red. I pushed him a little trying to be able to talk to him. I wanted to ask, 'What are you doing? I don't understand.'

"Everybody then gathered around us. They were trying to take me away from him, pushing me a little. I said, 'No, I'm cool; I just want to understand what he's doing.' Everybody was telling the same thing. I couldn’t understand the situation either.

"PSG players came saying the same thing than me: 'What happened there?' I answered that I didn't know. I just wanted to leave the pitch keeping my cool."