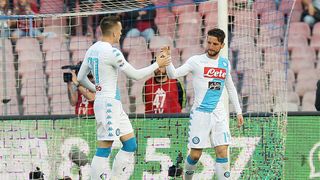 Dries Mertens celebrated his 30th birthday with two goals and an assist as Napoli beat Cagliari 3-1 to climb above Roma and into second in Serie A.

Roma are not playing AC Milan until Sunday and Napoli took full advantage with Mertens scoring at the start of each half and Lorenzo Insigne adding a third to edge Maurizio Sarri's men two points clear of the capital club.

Mertens' first goal, steering home Faouzi Ghoulam's cross after two minutes, was his side's 100th strike in all competitions this season and they should have added to the scoreline before the break.

Sarri's side mustered 14 efforts in a one-way first period, with Mertens wasting the best opportunity as he tamely shot straight at Rafael on the stroke of half-time.

But the Belgium international did find the net again four minutes after the restart, firing beyond the goalkeeper from the edge of the box to bring his own seasonal tally to 30 in all competitions.

Napoli continued to come forward and, following Raul Albiol's header against the crossbar, Mertens turned provider to tee up Insigne for a smart finish.

Cagliari netted a consolation just seconds before the final whistle as Diego Farias ran clear to clip a cool finish over Pepe Reina.