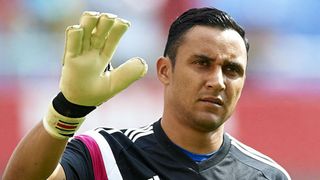 Keylor Navas has told Real Madrid he needs to be given more opportunities if he is to prove his quality.

Since a move from Levante at the start of this season, the Costa Rica goalkeeper has made just 11 appearances in all competitions.

On Sunday, Navas made his sixth La Liga start for Real in the 4-1 victory over Espanyol, with club legend Iker Casillas still enjoying his status as the preferred number one choice.

Casillas has come in for criticism from some Real supporters in recent weeks, and Navas hopes he will be given more chances to impress despite Real's reported interest in Manchester United keeper David de Gea.

"If I don't play, I can't prove my worth," said Navas, whose slip led to Espanyol's goal on Sunday.

"Just because I don't complain to the press doesn't mean that I'm not struggling. I wanted to play more. I never thought about being a back-up.

"I hope next year will be different and that I earn a starting role. I have a contract for five years and have a positive mindset.

"It's difficult, but I won't give up. I hope the opportunity arises at some point. Competition is good because it helps me improve."