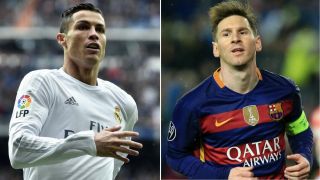 Charlotte Hornets head coach Steve Clifford is in a better position than most to make NBA comparisons and he did just that with Cristiano Ronaldo and Lionel Messi.

In modern-day football, no one comes close to Real Madrid's Ronaldo and Barcelona rival Messi, who are the all-time leading goalscorers for their respectively clubs.

Arguably the two greatest players of all-time, the phenomenal duo are often compared to legendary pair Pele and Diego Maradona.

Ronaldo - preparing for the Euro 2016 final with Portugal - and Argentina's five-time Ballon d'Or winner Messi have also been compared to some of basketball's best, with Clifford - a known Manchester United supporter - likening the two stars to the Cleveland Cavaliers' three-time NBA champion LeBron James and reigning MVP Stephen Curry of the Golden State Warriors.

"Ronaldo would be like ... he would be LeBron. Or Kevin Durant or Steph Curry. He's the best player - now I would say from a money standpoint and everything and endorsements, I don't know how much he makes, but I'm sure it's pretty incredible," Clifford told ESPN.

"Messi, to me, that's a better one [to compare]. I would say Messi of the current players would be more like Steph.

"You know, totally skilled-based. Not as physically imposing. I would say Ronaldo would be more like LeBron. Obviously a great skill level, but also Ronaldo's speed and strength is also so exceptional."

As a fan of both basketball and football, Clifford was asked who he would start a team with and the 54-year-old's response was diplomatic.

"Oh man. It's like when people say who would you want: LeBron or Steph? If you could get either one of them you'd be happy," he added.

"Look, if you could have either one of those guys you just take it and you have a smile on your face."