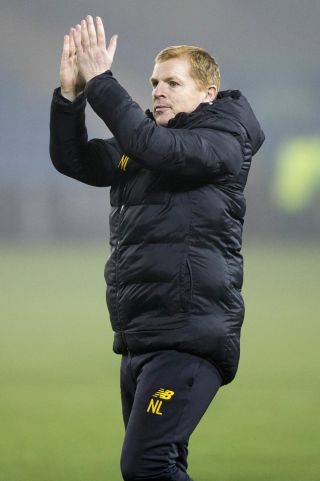 Neil Lennon will back Leigh Griffiths “to the hilt” if there are any repercussions after the Celtic striker appeared to throw tape at Kilmarnock fans following his substitution in the 3-1 win at Rugby Park.

The Scotland international made way for Mikey Johnston 10 minutes from time after earlier scoring the Hoops’ second goal, in between counters by Odsonne Edouard and Christopher Jullien, with Killie striker Nicke Kabamba netting for the home side.

Cameras appeared to capture Griffiths tossing away tape into the main stand and a fracas ensued with words exchanged between some home fans and the Hoops bench, with stewards and police moving into the crowd.

However, Lennon, who described the win as an “outstanding performance”, played the incident down.

He said: “He was getting a lot of unsavoury abuse, uncalled for. He was backed up by myself and his team-mates on the bench.

“I thought his behaviour tonight was exemplary and at times we take uncalled for abuse. He didn’t do anything wrong. People can blow it up, it was nothing.

“He threw a bit of tape on the ground. I don’t know how you can say he threw it at somebody or towards somebody.

“People take off tape and throw it away. There is nothing in it at all. The kid had played well, he hadn’t got himself into any bother on the pitch, he sits down and gets abuse from supporters.

“In this day and age we have to accept this and behave in a sanitised way and he did. You are always looking for a story that is just not there. I will back him and defend him to the hilt.

“He always seems to get controversy around him but I will back him to the hilt on this one, his behaviour was top class as was his performance. That’s two goals in two games and he is getting better and better.”

There was some concern when defender right-back Jeremie Frimpong was taken from the field a couple of minutes from the end on a stretcher after a challenge by Alan Power.

Lennon said: “We don’t think it is a fracture. He is up walking about on it so that’s good news and we will just have to see the severity of the bruising on it, that’s all.”

Boss Alex Dyer said: “I thought we played well against a good side but we made some mistakes.

“Celtic are top of the league and it was difficult for us, but we played some good football.

“However, you get punished when you make individual mistakes against a team like Celtic. The boys are working hard but it’s always a bonus when you beat teams like that.”