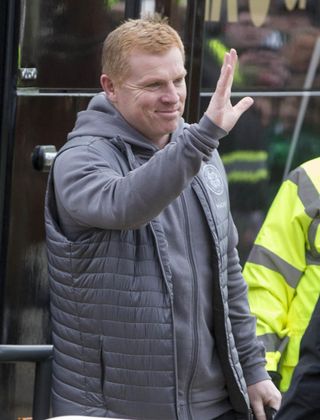 Interim Celtic boss Neil Lennon stressed that the goalless draw against Aberdeen at Parkhead on Saturday was “by no means a disaster” as the Hoops moved  a week closer to an eighth successive Ladbrokes Premiership title.

After taking over from Brendan Rodgers last month until the end of the season, the former Parkhead captain and manager guided his side to wins at Hearts and Hibernian but found the Dons too tough a nut to crack as they dropped points at home for the first time this season.

However, Rangers’ 1-1 draw with Hibs at Easter Road on Friday night means Celtic’s eight-point lead over their Old Firm rivals was restored with nine games remaining as they prepare for the trip to struggling Dundee next week.

Lennon told Celtic TV: “It is a point and no damage is done really.

“We can play better and we know that. It has been a difficult week, 10 days for us , three really difficult games but we are unbeaten.

“You want to win your home games. We didn’t work their goalkeeper enough, we were a little bit pedestrian, our final ball wasn’t great and we lacked a bit of urgency.

“We need to work harder in the games now to get over the line as quickly as possible.”

Skipper Scott Brown admitted that the match was  a “wee bit frustrating more than anything” but noted that Celtic have yet to lose a domestic game this year.

He said: “We made it into a bit of a battle and didn’t play our usual style.

“At the end of the day, though, it was a point and we’re sitting eight points clear at the top of the table.

“We’ve had a fantastic run in 2019 and this just continues the run.

“It wasn’t up to scratch. We didn’t create as many chances as we usually do and we didn’t get on the front foot from the start.

“The gaffer’s been brilliant since he’s come in, he’s spoken very well.

“He’s been very positive and he’ll continue to do that. He wants us to play the same style that we’ve been playing.

“But as the manager says, it’s been a rollercoaster couple of weeks but hopefully that’s us now over that we’ll go again against Dundee.”