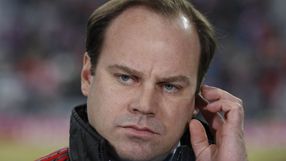 Buoyed by a 1-0 Bundesliga win over Nuremberg on Saturday that marked their seventh consecutive victory in all competitions, the Bavarians are looking to knock out Marseille after opening a 2-0 lead in last week's first match in France.

"We have our fate in our own hands in all three competitions," said Nerlinger of the chase for a Bundesliga-German Cup-Champions League treble that could feature eight games in less than four weeks.

"I have faith in the team. They have shown they can adapt to this rhythm of a game every three days and they are in good physical shape."

Bayern are already through to the German Cup final and are three points behind leaders Borussia Dortmund in the Bundesliga.

The Munich team, looking to reach the Champions League final to be played in their own stadium in May, will be without suspended midfielder Bastian Schweinsteiger on Tuesday after he was booked in Marseille.

Six Bayern players - including Thomas Muller, captain Philipp Lahm, Toni Kroos and David Alaba - know a yellow card will put them out of the first leg of a likely semi-final against Real Madrid who are 3-0 up on APOEL Nicosia of Cyprus.

"Our starting position is very good," said Lahm. "If we play our game with the same focus then we will not be threatened at all on Tuesday."

Didier Deschamps's side travel to Germany with confidence low as they occupy ninth position in Ligue 1.

Marseille have not played since the first leg at the Stade Velodrome after their home game against Montpellier was put back by the French League to help them prepare for the return match with Bayern.

Deschamps's team need all the help they can get, having lost eight of their last nine games in all competitions.

"It will be very tough to meet our objectives. Even impossible," France defender Rod Fanni told the club's website.

"It's hard to live with, psychologically and physically it's been tough."

Fanni, however, believes Marseille are capable of causing an upset. "You never know. As long as we have a small chance," he said.

Goalkeeper Steve Mandanda is back after suspension but centre-back Souleymane Diawara, who was banned in the first leg, is out for the rest of the season with a knee injury.