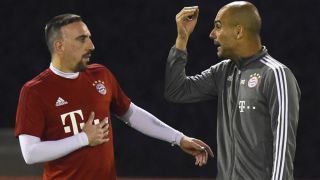 There was never any love between Pep Guardiola and Bayern Munich players, according to former Germany international Lothar Matthaus.

Guardiola has six months left on his contract in Munich but has already revealed his intentions to manage in the Premier League next season.

The 44-year-old is tipped to take over at Manchester City, with Chelsea and Manchester United also reportedly interested.

The Spaniard is on track for a third Bundesliga title with Bayern, but Matthaus thinks his mind is already focused on next season.

"Guardiola can say what he wants," Matthaus wrote in Sport Bild. "The squad-planning for Manchester City is too important for him to have his head 100 per cent with Bayern Munich.

"That's a dangerous situation to be in.

"Guardiola will have five difficult months in Munich. There never was true love between Guardiola and the Bayern players."

Bayern are in Doha for a mid-season camp during the Bundesliga break.