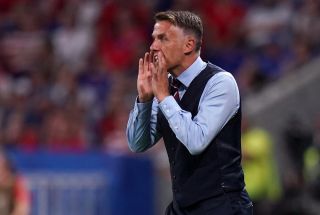 Phil Neville is committed to leading England through to the 2021 Women’s European Championships, Baroness Sue Campbell has said.

Neville, the former Manchester United and Everton player, has impressed since taking the managerial role in January last year, overseeing the Lionesses’ run to the semi-final of the World Cup.

Neville will take charge of Team GB at next year’s Tokyo Olympics before England host the European Championships the following summer.

“Phil was talking to me this morning about Tokyo, and the home Euros and what he wanted to do,” said Campbell, the FA’s head of women’s football.

“He has signed up to a three-year journey, and he seems committed to it. We would love for him to do it.

“He is a great communicator. One of the reasons I was very excited about him was that he is a student of the game, and is constantly wanting to learn. His own open-mindedness makes him a very authentic leader.”

I have stayed off social media this tournament to focus solely on playing for my country 🏴󠁧󠁢󠁥󠁮󠁧󠁿 Thank you for your unwavering support for this team ❤️ I AM ENGLAND TIL I DIE! I am 💔 but we still believe 🤓 1 more game to go 👊🏻 #Lionessespic.twitter.com/OPzNIElmXI— Ellen White (@ellsbells89) July 3, 2019

England fell short of a place in Sunday’s showpiece after succumbing to a 2-1 defeat to the United States in Lyon on Tuesday night.

Despite acknowledging England’s progress, Campbell believes the game’s grassroots have to be addressed in this country in order to challenge the US at future tournaments.

“We have made some headway but there is much more to do,” she added. “In some American schools they have got soccer every day of the week, but in our schools we are lucky if they get a few hours a week.

“You have to start at the foundation stage, and until we get that right we are going to be playing catch-up.”