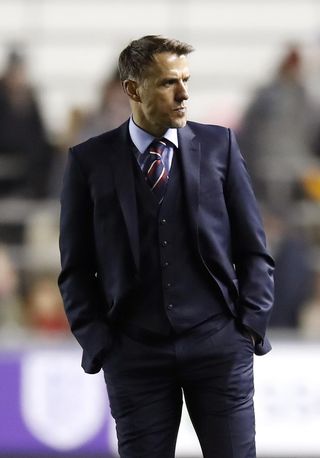 England Women boss Phil Neville declared himself disappointed with the result but “quite happy” overall after the 1-0 friendly defeat to Canada at the Academy Stadium.

Canada captain Christine Sinclair netted in the 81st minute as the Lionesses, back in action after winning the SheBelieves Cup last month, lost the first of their four ‘Road to France Series’ warm-up matches ahead of the summer’s World Cup.

It was England’s third defeat in 16 games since Neville took charge in January 2018, with the previous one being the 2-0 loss to Sweden in November.

Neville said after Friday’s match at the home of Manchester City Women: “When we lost against Sweden I wasn’t happy really. I didn’t think we deserved it against Sweden and thought we got outplayed.

“Tonight, I didn’t think we deserved to lose, first and foremost. And I thought it was a brilliant game in terms of the test we wanted.

“I saw a team that tried to be brave. I thought in the final third just our composure let us down, particularly in the second half when we got some real good opportunities to score.

“The disappointment is that we have lost and the players are absolutely gutted because they don’t like losing.

“But I was actually really pleased with the game. I said to the players at half-time that it was a top-class game, probably harder than the games we had in the SheBelieves Cup.

England struggled to pose much of a threat in the first half until Nikita Parris brought a save out of Stephanie Labbe in the closing moments.

After the break, Toni Duggan sent a shot narrowly wide as the hosts registered a number of attempts without breaking the deadlock.

At the other end, goalkeeper Karen Bardsley made a fine save to deny Janine Beckie before Sinclair netted her 180th international goal, prodding in on the follow-up after Nichelle Prince’s strike had hit the bar.

Neville added: “I think we’re heading in the right direction. That’s the biggest thing at the end.

“They were a little bit excitable in the final third. The team stuck together, they kept going, and as I said, I feel happy here tonight, I feel totally relaxed about the way the game went. I thought it was just the game we planned for.

“I said to the players at the end we shouldn’t lose that feel-good factor just because of one defeat.

“We want to win every game. My players are disappointed in there because they’re used to winning. I think in the next 24 hours they’ll come to realise this is just another part of our journey.

“Along the way you’re going to get little bumps. I thought Sweden was a bump, I didn’t think tonight was a bump. I actually feel really positive coming out of it.”

Having beaten Brazil (currently ranked 10th in the world) and Japan (seventh) and drawn with hosts the United States (first) at the She Believes Cup, this game saw England (third) taking on a side ranked two places below them.

Canada boss Kenneth Heiner-Moller was quoted on canadasoccer.com as saying: “I think we put on a very good performance.

“This is one of the contestants who will compete to win the FIFA Women’s World Cup.

“This win will definitely give us momentum and I think this was a big step for us. We’ve played some big opponents ahead of this match, but this was by far our best opponent this year.”