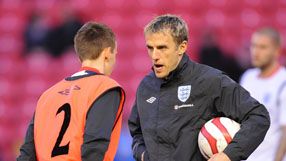 The 35-year-old is keen to emulate the successes of his brother, Gary, who is now part of Roy Hodgson's coaching staff in the senior England team.

Neville has spent time with England's Under-21s this season and has admitted the experiences have left him wanting much more.

"I spent three days with the England Under-21s over the summer and it was the best three days I've had in football. It inspired me.

"I watched a match and the manager said to me: 'Give me two things at half-time we need to improve on'. Well, the whole first half I must have written down 100 things. I was that nervous I was shaking.

"It was a totally new experience. I did come up with the two, eventually. It made my mind up: I want to become a manager, definitely."

Tuesday marked the official unveiling of the FA's brand new St George's Park National Football Centre – a facility which cannot be topped anywhere else, according to Neville.

"It's just fantastic," said the midfielder. "I've been to brilliant facilities in Spain, in America, in Dubai and it's the best I've ever seen.

"Incredible. It offers us in this country such an opportunity. We have to use it, have to get junior teams there, have to get our coaches trained up there. Mind, I think we needed it 10 years ago."