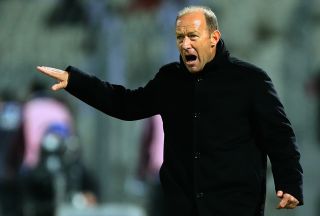 The Seville-based club moved for their former player in an attempt to revive their fortunes after another defeat on Saturday, Real Madrid sending them to a 5-0 home loss.

Juan Carlos Garrido was relieved of his duties on Sunday having been in charge for just 10 matches, but new boss Calderon remains positive even though Betis sit eight points adrift of safety.

The 53-year-old Argentinian made 74 appearances for Betis during his playing career and admitted he could not turn the club down in their hour of need.

"When a loved one is sick all pull together to help," he told Betis' official website.

"When a delicate situation like this arises I come running.

"I come with the hope and the belief that we will move forward."