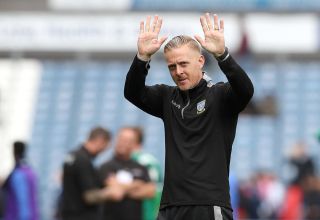 New Sheffield Wednesday boss Garry Monk saluted his battling side as they snatched deserved Yorkshire derby bragging rights with a 2-0 win at Huddersfield.

Goals from on-song strikers Steven Fletcher and Sam Winnall did the damage as the Owls impressed to upset the Terriers, who had Danny Cowley in charge for the first time.

“Like any new manager you want to get off to the best possible start,” Monk said. “There’s been doubts about this squad and these players for the last couple of years, for whatever reason.

“I don’t know what’s gone before, but maybe this squad haven’t had enough belief to produce the quality we all know they have.

“But they’ve been great since I’ve come in. I’ve been really pleased with the response of the squad.

“I said this week was about not over-complicating things for the players. We have a lot of work ahead of us, but I’m delighted with them.

“The team attitude towards a difficult game was very pleasing. I thought we created the better chances and I was delighted with the goals.

“But the most important thing was to get the three points. We deserved that. The fans were right behind us and fantastic for the team.

“Overall we had the best chances in the game, we could have scored one or two more. We know we have the quality, it’s about making sure the belief is there.

“The players deserved a lot of credit. We kept the crowd quiet and scored our goals at good times.”

The hosts had been looking for a welcome win in Danny Cowley’s first game, but defeat means they remain winless in the Sky Bet Championship this term.

Scotland international Fletcher scored his fourth goal in six games in the 10th minute with a powerful header.

And then substitute Winnall made sure of the points with his first league goal for nearly two years with 18 minutes remaining.

Frustrated Cowley admitted he has a tough job on his hands to get the club firing again.

“I think today we could see that this is a football club and team which is hurting, which is what we anticipated,” Cowley said. “But we’re here to help them.

“This club needs some grit, we need to get some fight. We didn’t have enough energy, we were too slow.

“You have two choices in life, you can be a victim or a fighter. At the minute we’re affected by the scoreboard, which you can understand. But we have to change that.

“I have to be fair to our players as we’ve only been here since Tuesday and some have been away on international duty.

“Sheffield Wednesday were definitely the better team. We didn’t pass the ball with enough purpose.

“We need more pace in the game when we move the ball and if we do, that should give us more space.

“We need to build a better understanding, which will make them believe and get more confidence.

“We’ve got another week to work now, with all the group in the building, and we have a lot to do before a tough away game (at West Brom).”