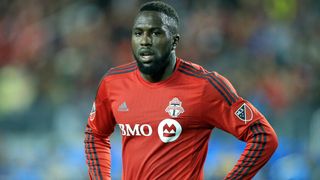 Amid a six-game winning run, Toronto rallied to earn a point at Red Bull Arena thanks to Benoit Cheyrou, who cancelled out Bradley Wright-Phillips' first-half opener.

However, Toronto could have made it seven successive victories but Altidore had his penalty saved with nine minutes remaining in Harrison, New Jersey.

Back at home after their 13-month unbeaten streak at Red Bull Arena in the regular season was snapped by LA Galaxy last week, New York were determined to return to winning ways.

And Wright-Phillips put the Red Bulls on track in stunning fashion, converting an overhead kick in the 38th minute.

The score remained unchanged at half-time but substitute Cheyrou came off the bench and equalised 20 minutes from the end.

Former Lille and Marseille midfielder Cheyrou got down low to nod a header across Luis Robles.

United States international Altidore had the chance to win it for Toronto 11 minutes later but he was denied by Robles, while Tosaint Ricketts rattled the crossbar moments later.

Toronto are six points clear atop the Eastern Conference, though they have played two more matches than Orlando City.

The Red Bulls occupy the sixth and final play-off position in the east.