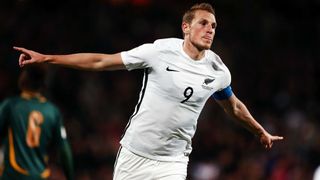 New Zealand took a step closer to the World Cup with a 6-1 first-leg win over the Solomon Islands in the Oceanic section play-off.

Burnley striker Chris Wood scored a hat-trick to help the home side to a commanding victory in Auckland that puts them on the brink of progressing to the intercontinental tie in November.

Wood converted from close range following a Ryan Thomas shot to put New Zealand ahead after 18 minutes, before he netted his second of the game nice minutes before half-time with a cool finish over goalkeeper Phil Mango.

Kosta Barbarouses' powerful drive made it 3-0 three minutes later, and although Henry Fa'arado pulled one back from the penalty spot, Thomas combined well with Monty Patterson before firing home his side's fourth.

Michael McGlinchey scored a brilliant free-kick before Wood completed his hat-trick in injury time to cap a fine performance for Anthony Hudson's side, who are now firm favourites to progress ahead of the second leg in Honiara on Tuesday.

The winner of the tie will go on to face the fifth-place team from South American's qualifying section in a final play-off tie to determine who will be at next year's finals in Russia.