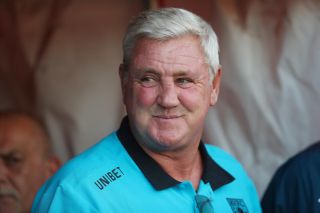 Newcastle have appointed Steve Bruce as Rafael Benitez’s replacement as their search for a new manager finally came to a close.

The Magpies have confirmed the 58-year-old Geordie has left his job at Sheffield Wednesday to become the 10th permanent boss of controversial owner Mike Ashley’s 12-year-plus reign on a three-year deal.

A club statement said: “Newcastle can now announce that Steve Bruce has been appointed as the club’s new head coach.

“The 58-year-old, who was born in Corbridge, Northumberland and raised in Wallsend, returns to Tyneside after signing an initial three-year contract and will be joined at St James’ Park by coaches Steve Agnew and Stephen Clemence.”

Bruce and his staff are due to fly out to China to meet up with the players, who open their Premier League Asia Trophy campaign against Wolves in Nanjing on Wednesday morning.

The new boss said: “I’m delighted and incredibly proud to be appointed as head coach of Newcastle. This is my boyhood club and it was my dad’s club, so this is a very special moment for me and my family.

“There is a huge challenge ahead of us, but it’s one that my staff and I are ready for. We’ll roll our sleeves up and we’ll be giving it everything from the off to ensure supporters have a successful team that they can be proud of.”