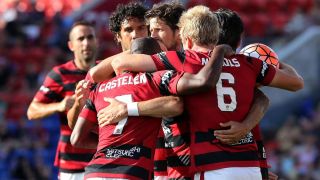 Western Sydney Wanderers gave their A-League premiership chances a huge boost with a 1-0 win over Newcastle Jets at Hunter Stadium on Sunday.

Jaushua Sotirio scored a 17th-minute goal for Tony Popovic's men and it proved decisive despite the visiting Wanderers' dominance.

The Wanderers had their chances to add to the first-half opener but eventually had to survive some late pressure from the hosts.

With the win, Popovic's side moved level on points with league leaders Brisbane Roar with four games remaining in the regular season.

For the Jets, their slim finals chances took a blow as they were left seven points adrift of sixth-placed Melbourne Victory.

Mark Bridge was released down the right and managed a cutback, with Sotirio charging into the area before firing a finish into the roof of the net.

The Wanderers had their chances to add to the goal and were almost punished for failing to do so as Nigel Boogaard powered a header onto the post in the 81st minute.

Western Sydney managed to hold on for an important three points, with Jets goalkeeper Mark Birighitti almost equalising from a corner in additional time.