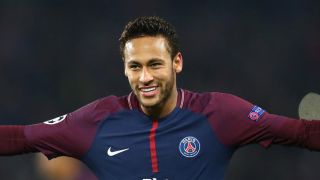 Neymar has won the Samba d'Or for the third time in his career.

The award, which recognises the best Brazilian player in Europe and is voted for by fans, journalists and a selection of former players, was previously won by the Paris Saint-Germain superstar in 2014 and 2015 during his time at Barcelona.

It means Neymar joins club team-mate Thiago Silva with three victories in the poll, which launched with inaugural winner Kaka in 2008.

Liverpool midfielder Philippe Coutinho – still touted as a potential Camp Nou replacement for Neymar – won in 2016 and came second overall this time around, with Real Madrid full-back Marcelo coming in third ahead of Paulinho, Casemiro and Gabriel Jesus.

2 - Games with at least 1 goal AND 1 assist in the Top 5 European leagues this season:Neymar 6Kylian Mbappé 5Leroy Sané 4Versatile. December 16, 2017

Neymar has scored 17 goals in 20 appearances for PSG since joining from Barca in a world record €222million deal in August.

He will receive his trophy at a ceremony in Paris in February.