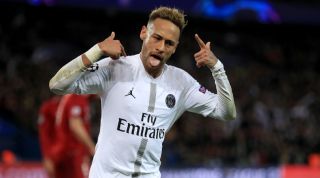 The Catalan club’s summer efforts to bring the Brazilian back to the Nou Camp failed as the transfer deadline passed on Monday evening.

Diario AS now reports that the 27-year-old will come head-to-head with his former employers in a Barcelona court at 10am on 27 September, just three weeks on from the club’s attempt to sign him.

Neymar is suing Barca for €26 million and the La Liga giants are suing the player for €75 million.

Both actions would likely have been dropped if he had returned to Catalonia this summer but the legal cases will move forward now he has remained in Paris.

The subject of the dispute is a €40 million bonus Neymar was due to receive after penning a new deal with the club just months before sealing his world record €222 million move to PSG in August 2017.

The Brazil international was handed €14 million up front but Barca have withheld the remaining €26 million since he decided to leave the club.

They accuse the player of failing to honour his contract, while Neymar believes he’s entitled to the full bonus payment plus interest of 10 per cent.

The court case has been a long time coming as it was postponed twice already this year, once in January and again in March.

PSG president Nasser Al-Khelaifi is expected to give evidence as a witness despite previously ruling out the possibility, but Neymar himself is likely to be represented by his legal team rather than attending in person.