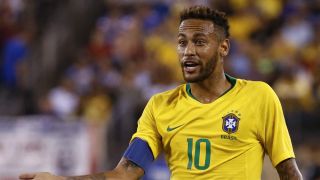 Uruguay made sure it was anything but a friendly for Neymar.

The Selecao captain shouldered the responsibility as Brazil snatched a narrow win over an undermanned Uruguay, who displayed their trademark fight despite having almost a whole team out through injury.

It was a far from vintage performance from Brazil and their talisman on a dreary night at Emirates Stadium - Oscar Tabarez's side made sure of it - with Neymar's second-half penalty proving the difference.

But Tabarez's team produced a typically Uruguayan display – one of intensity, toughness and counter-attacking to give Tite's side a serious test they only scraped through thanks to Neymar's 60th international goal.

Uruguay's veteran boss Tabarez may have lost trusted midfield lieutenants Diego Perez and Egidio Arevalo Rios, the menacing tandem that anchored the side that finished fourth at the 2010 World Cup and claimed a record-breaking Copa America title a year later, but his team remain dogged and difficult in the middle of the park.

On paper a midfield three of Rodrigo Bentancur, Lucas Torreira and Matias Vecino represents a significant shift – while the Arsenal midfielder combines a terrier-like quality with ball-playing abilities in the centre of the pitch, his team-mates are languid playmakers who provide the ideal foil for an attack headlined by Luis Suarez and Edinson Cavani. The reality was significantly different.

The trio spent most of the match chasing down Neymar as he drifted in from the left and attempted to get Brazil firing. Vecino and Torreira were shown yellow cards for scything down the Paris Saint-Germain superstar in deep areas, his stepovers and persistent dribbling lighting the fire of La Garra Charrua – the distinctively Uruguayan trait of possessing the greater intensity, anger and desire compared to an opponent.

Uruguay's line-up appeared sure to play into Neymar's hands. His mouth would surely have been watering when La Celeste's injury problems forced Tabarez to hand Mathias Suarez a debut at right-back and place 19-year-old Bruno Mendez, also earning his first cap, next to him in the centre of defence.

But the free role he is granted by Tite and which Filipe Luis' persistent attacking enables meant he rarely tested the inexperienced duo.

The former Barcelona star pulled a save from Martin Campana with an early free-kick and only got on the scoreboard in the 76th minute when Diego Laxalt sent Danilo to ground inside the box – referee Craig Pawson pointing to the spot following a signal from assistant Ian Hussin. Uruguay were incensed their hard work had been undone and Luis Suarez was booked for his protests.

Tite opted to play Roberto Firmino through the middle, insisting prior to kick-off the Liverpool striker is a "true number nine" and not a false one. However, his desire to drop off the front and participate in the build-up play often left Brazil without a focal point, something Richarlison could have provided had he not been placed on the left after coming on for Douglas Costa.

It was left to Neymar to make the difference and, despite Uruguay's non-stop hounding making life extremely difficult for him, he had the maturity to have the final say.