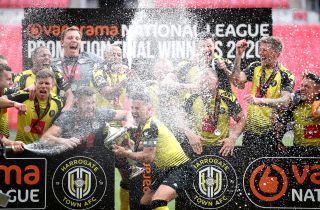 Harrogate Town have secured promotion to the Football League for the first time in the club’s 106-year history.

Town, who finished bottom of English football’s sixth tier 10 years ago, made history by beating Notts County at Wembley in the National League play-off final.

Here, the PA news agency looks at five things you may not know about the North Yorkshire club.

Simon Weaver has become the longest-serving manager in the Football League. The 42-year-old former Lincoln defender, appointed as Town’s player-manager in May 2009, goes straight in at the top of the list. He has been in charge for 11 years and two months, over three years longer than the previous longest-serving boss, Gareth Ainsworth, who has been at Wycombe’s helm for seven years and nine months having taken on the player-manager’s role on a permanent basis in November 2012.

Father and son partnership pays off

Weaver had been in the role for just over two years when his father Irving Weaver took control of Town from Bill Fotherby, the former managing director of Leeds, who no longer wanted to fund the club. Irving Weaver, a multi-millionaire property developer, who has appeared on several Sunday Times rich lists, was at first sceptical due to the inevitable accusations of nepotism, but both men claim their working relationship has provided stability and is the bedrock of Harrogate’s core family values.

Back up with Town in-Stead

Jon Stead, probably Town’s best-known player, faced his former club Notts County in the Wembley play-off final. The well-travelled striker, who has had spells at Huddersfield, Blackburn, Sunderland, Sheffield United and Ipswich, spent four years at Notts and was part of their team relegated out of the Football League before joining Harrogate in the summer of 2019. Stead had two cut-outs of former friend Jordan Sinnott placed in the seats at Wembley. Former Matlock Town player Sinnott died in January after being attacked during a night out.

Harrogate must start work this week on their 5,000-capacity CNG Stadium by digging up their 3G pitch in order to comply with EFL regulations. The artificial playing surface has proved hugely popular with the local community, but a similar facility for all age groups will now be available across the road at St John Fisher High School. It will take 10 weeks to lay a new grass pitch and with the new season set to start on September 12, Town will have to ground-share for their first few home matches, at a current EFL club yet to be decided.

At the end of the 2009/10 season, manager Simon Weaver’s first in charge, Town finished bottom of the Conference North (now National League North). They were spared relegation to the seventh tier of English football only because Northwich Victoria were demoted instead due to financial irregularities. Harrogate avoided relegation the following season by winning 5-0 at Corby on the final day. They became a full-time club in 2017 and won promotion to the National League via the play-offs in 2018.