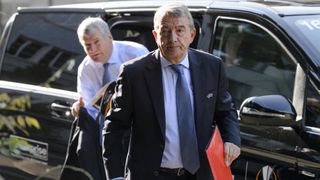 The 65-year-old was suspended by FIFA after failing to report possible misconduct concerning the awarding of the 2006 World Cup to Germany.

Niersbach described the sanction as "inappropriate and exaggerated" this week and said he was consulting his legal team over the prospect of launching an appeal.

He has now confirmed he will take steps to have the ban overturned.

"After consulting with my lawyers, I will appeal," he told Bild. "Even if only to receive the written reasoning behind the verdict.

"I can only repeat that I think the verdict is excessive and that's why I owe it to myself to appeal."

Niersbach resigned as president of the DFB in November, after investigators looking into allegations of corruption in the bidding for the 2006 World Cup searched his home, and those of predecessor Theo Zwanziger and former general secretary Horst Schmidt, along with the DFB headquarters in Frankfurt.

A member of the FIFA Council, Niersbach claimed his resignation was to "protect" the DFB and maintained his innocence.

However, a FIFA probe found him guilty of failing "to report findings about possible misconduct concerning the awarding of the 2006 FIFA World Cup".

It is alleged that the DFB sanctioned a €6.7million payment to former Adidas chief Robert Louis-Dreyfus, payback for a loan that had been used to buy votes for Germany's successful bid to host the tournament.

FIFA's investigation was not centred on whether Niersbach himself was involved in the deal, "but only evaluated Mr Niersbach's awareness of the said incidents and his failure to report them to the Ethics Committee in a timely manner".