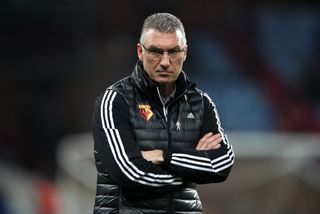 Watford manager Nigel Pearson has raised concerns about a coronavirus-related death in the Premier League and urged caution before a decision is made about whether to resume the season.

Clubs could be back in some form of training next week following a Premier League meeting on Monday, when medical protocols will be discussed and voted on, while the campaign could be up and running again by mid-June.

Pearson has some reservations about ‘Project Restart’ and called for a more pragmatic approach with the country still very much in the grip of a pandemic.

“God forbid we have a fatality,” he said in The Times. “People are closing their eyes to the threat.

“Yes, we would like to restart it but it’s got to be safe. We should be cautious. To ignore possibilities is foolhardy. It’s about safeguarding people’s health.

“We have to try to believe (Government) advice that we’re being given that we’ve reached the peak but there’s still an incredible number of people losing their lives through this.

“The death toll in the UK is anything between 33,000 and 38,000. That’s filling our stadium and then filling it half again. It’s a sobering thought.”

While Monday’s talks could prove another step on the road towards the 2019-20 campaign being concluded, it has been reported that shareholders, broadcasters and Government officials are discussing whether the BBC could show its first live Premier League game.

Of the 92 games left, 47 have already been assigned live TV coverage while an idea is said to be in the works which would see the remaining 45 fixtures shared out between Sky, BT Sport, Amazon and the BBC.

However, there remain sizeable obstacles to overcome, with Norwich captain Grant Hanley joining the chorus of players to express doubts about a resumption.

“I think the overall feeling is that players have got concerns,” Hanley, who has been in talks with the Premier League, told Sky Sports. “There’s just so much uncertainty.

“Looking at the protocols for going back to training, I think that’s probably fair enough. But it’s just the next step after that, like where do we go from there? In terms of going back into contact training and games.

“My missus is pregnant and she’s due at the start of July, so there’s obviously worries there for myself. Some lads have obviously got vulnerable family members or whatever.

“It’s just so difficult to see five or six days in front of us or anything past that.

“There’s nothing (in terms of the) sort of information being given to us on, for example, how do we travel to games? Where do we stay? What are the hotels? How can we guarantee hotels are going to be safe for us to be in?

“Ultimately it’s putting your family at risk that is the main concern and that’s the worry I think all the teams will have at this minute in time.”