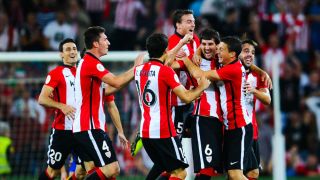 Ernesto Valverde will have the chance to quickly win a place in the affections of Barcelona's supporters if he can begin his tenure as head coach by defeating bitter rivals Real Madrid in the Supercopa de Espana at the start of next season.

Barca are a regular fixture in the clash that pits LaLiga champions against Copa del Rey holders over two legs, claiming the trophy on a record 12 occasions.

But they suffered a chastening experience in the traditional curtain-raiser when Valverde's Athletic Bilbao thrashed them 4-0 at a typically boisterous San Mames in 2015.

Barcelona rotated their line-up from the 5-4 extra-time win over Sevilla in the UEFA Super Cup three days earlier but there were few fears Luis Enrique's treble winners would unravel quite so spectacularly against a side they beat to lift the Copa del Rey two and a half months earlier.

They began on the front foot but went behind to a simply sensational opening goal – Mikel San Jose crunching an improbable shot back over Marc-Andre ter Stegen from inside the centre circle after the visiting goalkeeper's headed clearance fell invitingly.

Athletic were rampant from that point on, pressing and harassing Barca to distraction and leaving their veteran striker to reap the rewards.

Aritz Aduriz muscled his way above Javier Mascherano to make it 2-0 eight minutes into the second half and swivelled in the box to dispatch a loose ball after the hour.

Dani Alves conceded a penalty for pushing at a corner in the 68th minute, leaving Aduriz to step up and complete a quickfire hat-trick from the spot.

Barcelona were unable to repair the damage, Aduriz on target once more in a 1-1 return clash at Camp Nou, as Athletic and Valverde sealed a famous triumph.

If he manages to dispatch Madrid in similar fashion, instant hero status awaits.