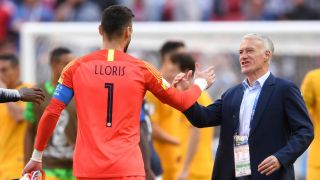 France head coach Didier Deschamps has no complaints over VAR after his side benefitted from its use during their World Cup Group C win over Australia on Saturday.

After a disjointed first half, the game sparked into life shortly after the interval as referee Andres Cunha awarded a penalty to France after consulting VAR and deciding that Josh Risdon had clipped Antoine Griezmann just inside the area.

The Socceroos levelled soon after with a penalty of their own, but Paul Pogba ensured a winning start for Les Bleus with a deflected effort 10 minutes from time.

Griezmann's goal was the first in World Cup history to have been aided by the use of VAR, but it will do little to quell the fierce debate about its use.

Deschamps, though, was more than happy with the decision-making process against Australia, hinting that he might feel differently if it works against his side.

He said: "I'm not going to complain about VAR because it was in our favour obviously.

"It's not easy with VAR, but we saw it was not in our favour [in real time]. It will be useful in some situations.

"I didn't see the screen, I'm not allowed to go to the screen or replay it. I will have the opportunity.

"Maybe it's not clear. When I saw Portugal v Spain, there were goals that maybe stand, maybe don't. You can interpret decisions. A referee gets an alert and make the final decision. It's up to him."