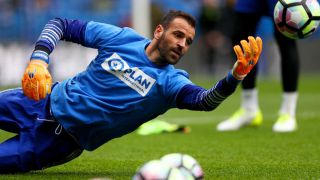 The 34-year-old Portugal international has not made a single professional appearance for the freshly minted Premier League champions since joining from Dinamo Zagreb last August.

He only made the bench in the Premier League twice but was praised in a club statement for being "an important part of the goalkeeping set-up that has allowed number one Thibaut Courtois to flourish in the title-winning campaign".

Eduardo said: "I am very happy to stay at Chelsea for another year. This season has been very successful for the club, and everybody has made me feel like a part of the family.

"I hope next season can be just as positive and we can win many more trophies."

Chelsea technical director Michael Emenalo added: "Since joining us, Eduardo has been a model professional.

"He has used his wealth of experience at the top level to bring the very best from his fellow goalkeepers and has been a reliable, popular and respected member of the squad.

"We are delighted he has chosen to commit his future to Chelsea."