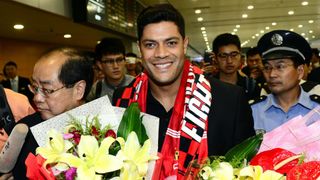 The biggest clubs in European football have been warned that none of their players are out of reach of Chinese Super League clubs.

The 29-year-old joins the likes of Ezequiel Lavezzi, Ramires, Jackson Martinez, Demba Ba, Fredy Guarin, Gervinho and Paulinho all plying their trade in the Asian nation.

More and more Chinese teams are investing heavily in football, with government interest raising the standard of the game in the country.

And with the likes of Jiangsu Suning beating Liverpool to the signing of Brazilian Alex Teixeira, Europe's biggest clubs have been warned that their best talents are not out of reach.

"No [player is out of reach for Chinese clubs]. I'm working closely with Beijing and Shanghai football clubs," said Eric Gao, chief executive of iRENA, a company which represents 12 Super League clubs.

"I talk with some UEFA people and with clubs, they ask me 'Eric, can you help us to find some agents who can buy some top players?'

"Chinese clubs will pay much more, since lots of clubs compete with each other who can pay more right now in China.

"[The Super League clubs] will be trying to buy top-level players," he said.

"I know a lot of Chinese football clubs are interested. They talk with Manchester City for some kind of good player."

"They might never have known before. It's very good for them. It also generates many opportunities for the investors. The money can return to them. It's not only spending the money.

"I control some shortlists. I think top players. This is not the right moment to tell you the exact names."