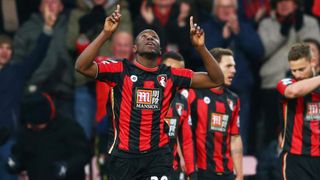 Striker Benik Afobe insisted that he does not feel under any pressure after scoring his first Premier League goal in AFC Bournemouth's 3-0 victory over Norwich City.

The south coast club signed the 22-year-old from Wolves earlier this month and he missed several excellent chances on his debut against West Ham in midweek.

But the former Arsenal man opened his account for his new club by bagging the third goal in what was a vital win over fellow-strugglers Norwich at the Vitality Stadium on Saturday.

And he claimed that the reported £10 million transfer fee and accompanying level of expectation will not prevent him from playing his natural game.

"I've never felt pressure," he told Sky Sports. "When you're a little boy, you just go out there and play football and I've always tried to keep to that.

"I've worked hard and I want to enjoy it.

"The most important thing is to play with a smile on your face and I've done that today."

Afobe was understandably thrilled with both bagging his first top-flight goal and playing his part in securing a well-deserved win for the hosts which edged them away from the relegation zone.

"First and foremost, we just wanted to win the game and we've scored three goals, kept a clean sheet and I've scored my first goal, so I'm delighted," he said.

"Before the game, the manager said that we had to be better than we were against West Ham.

"We pressed from the front and worked hard for each other and I think the defence will be delighted with the clean sheet."

Afobe was also involved in a highly-contentious incident just before the break when he was brought down on the edge of the box by Norwich goalkeeper Declan Rudd.

Rudd escaped with a yellow card, but the frontman felt that it should have been red.

"To be honest, that was a decision for the referee," he said, "but he definitely caught me and I've got a huge bruise.

"I thought it was a red card at the time, but I'm just happy that we won the game, so it's all forgotten about."