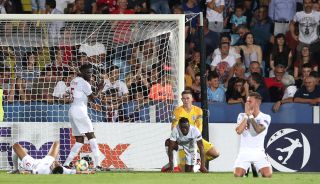 Boss Aidy Boothroyd has told his England Under-21s to pick themselves up after their heartbreaking late Euro 2019 loss to France.

Aaron Wan-Bissaka’s injury-time own goal – when he sliced in despite Dean Henderson coming to gather the ball – condemned the 10-man Young Lions to an opening 2-1 defeat in Group C.

Henderson earlier saved Moussa Dembele’s first-half penalty but the game turned after Hamza Choudhury was sent off for an awful tackle on Lille’s Jonathan Bamba just after the hour.

Houssem Aouar’s resulting penalty hit the post but England caved to late pressure in Italy leaving them struggling to make the last four.

Boothroyd said: “We are all very disappointed but we have no time for sulking.

“We have another game coming up (Romania on Friday) and if we’re going to get out the group we need to get maximum points.

“If you don’t take your chances and stop your opponent you put yourself in a vulnerable position.

“We could quite easily have gone in 3-0 at half-time. I thought we were the better team by a long way in the first half.

“We tried to rally but in the end, it was just wave after wave of attack and we couldn’t get them off us. We take it and move on.”

Leicester midfielder Choudhury apologised to Bamba immediately after his reckless tackle but the challenge changed the game.

“He is devastated in there,” said Boothroyd, with England third in Group C after Romania’s 4-1 win over Croatia earlier on Tuesday.

“There is no malice in him, he’s a good guy who thinks he has hurt a fellow professional and let his team-mates down.

“It was just his enthusiasm to want to block the ball.”

Boothroyd also refused to criticise Wan-Bissaka for his late mistake, slicing the ball over Henderson from close range as the goalkeeper came to take Jean-Philippe Mateta’s flick.

He added: “To be perfectly honest all I saw at the end was everyone on the floor devastated. I haven’t had a chance to look at that yet.”

Foden scored nine minutes after the break when he beat three players and found the bottom corner.

Choudhury was dismissed after a VAR review and Lyon’s Aouar missed his penalty before more late drama at the end.

He said: “He went to the hospital for medical tests. We hope there’s nothing broken.

“I haven’t seen the footage but as far as I have been told they tell me a red was justified.”