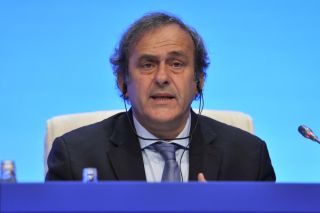 The Investigatory Chamber of the Club Financial Control Body met last week to discuss 76 clubs whose finances have come under scrutiny, with the likes of Manchester City and Paris Saint-Germain reportedly failing to meet regulations under the FFP initiative.

Clubs who fail FFP are likely to face hefty sanctions, but UEFA president Platini has revealed that will not involve exclusion from European football.

Speaking to Le Parisien, he said: "The first decisions will be announced in May.

"If you expect blood and tears, you will be disappointed. There will be tough measures, but not exclusion from European competition.

"Overall losses of European clubs have gone from €1.7 billion to €1 billion this year, so we are winning our bet. But some clubs are always on the edge."

Platini was pressed specifically on whether PSG were one of the club's under investigation, but he was coy on whether the Ligue 1 leaders will face sanctions.

He added: "I do not talk about any club in particular, that is not my role. Let's just say that PSG's economic model is unique.

"They simply have chosen a path to finance their investments and achieve balance. I am not sure (if  PSG comply with FFP)."