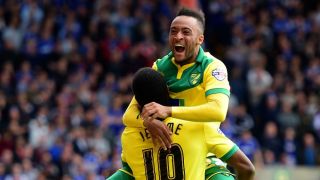 Second-half strikes from Wes Hoolahan, Nathan Redmond and Cameron Jerome moved Norwich closer to an immediate return to the Premier League, and continued a sensational run under Alex Neil.

Ipswich – for whom Christophe Berra was sent off in the second half – were given a glimmer of hope when Tommy Smith cancelled out Hoolahan's opener, but Mick McCarthy's side will face another season in the second tier.

A tense opening half saw neither side dominate proceedings, with the visitors slightly shading things without ever stretching John Ruddy.

That all changed after the break, though, as the game burst into life and Redmond was the catalyst.

The Norwich forward's mazy run into the Ipswich penalty area eventually opened up a shooting opportunity, his curling effort beat Bartosz Bialkowski but Berra kept it out with the use of his arm.

Referee Roger East showed the defender a red card, and Hoolahan converted from the spot.

Ipswich were only behind for 10 minutes, though, as sloppy Norwich defending gifted Smith the equaliser, the centre back ghosting in to meet Championship top-scorer Daryl Murphy's knock down and fire past Ruddy.

An action-packed 15 minutes was not finished there as Redmond restored Norwich's lead four minutes after the hour, the forward firing under Bialkowski after Ipswich failed to clear.

Jerome – having missed from a yard after 71 minutes – secured victory and a place at Wembley for the hosts with 14 minutes to play with a cute finish from Redmond's pass.