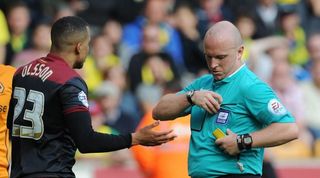 The Sweden international was shown a second yellow card in Norwich's 1-0 defeat at Molineux earlier this month for bringing down Rajiv van La Parra and then shoved referee Simon Hooper slightly before leaving the field in a visibly angry fashion.

Olsson was duly charged for misconduct by the Football Association, and the governing body announced on Monday that the 26-year-old has been handed a three-game ban and a £3,000 fine.

The FA stated that Olsson in "making physical contact with the referee immediately prior to being shown a red card and for his behaviour as he left the field of play amounted to improper conduct, which occurred outside the jurisdiction of the match officials".

Norwich have since confirmed they will not appeal the charge and, as such, Olsson will miss Championship clashes with former club Blackburn Rovers and Ipswich Town.

He will also be unavailable for Norwich's League Cup tie with Crawley Town.