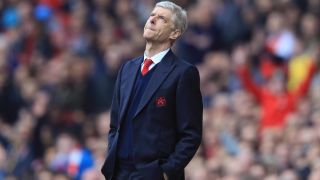 Wenger's teams have been renowned for playing possession-based games, but Chelsea are sixth in that statistic this season with 54.2 per cent.

That follows on from Leicester City's remarkable title-winning campaign of 2015-16, when they ranked 18th with just 42.4.

Wenger pointed to the trend of the Premier League's top teams, and said a lack of European football also helped.

"Over the last two seasons, teams who have not big possession have won the league," he told UK newspapers.

"And, as well, teams who were not involved in Europe, at all, won the league.

"Because the league is so physically difficult, maybe it is very difficult to cope with both. We will see how Chelsea respond next season."

Chelsea can secure their crown by beating West Brom on Friday, but Wenger has no plans to change.

"Over a longer period it is still the teams who have the most possession," he said.

Arsenal are sixth in the table and face a crucial trip to Southampton on Wednesday.