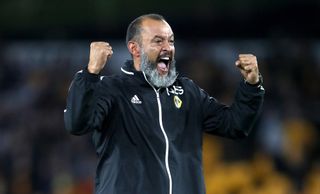 Wolves boss Nuno Espirito Santo hopes the celebrations at Molineux on Saturday can lift his team against Chelsea.

An uplifting atmosphere is expected at the stadium as the club marks its 130th anniversary of playing there, with Frank Lampard’s side the visitors.

Activities are planned before the match and at half-time which Nuno believes can have a positive effect on Wolves as they aim for their first Premier League win of the season.

“It shows the support we have been receiving from Molineux every game. The atmosphere, the way the fans push the team and help the team in such difficult moments.

“Tomorrow is going to be a very tough game, we’ll need that support and we’ll have it. Always together.”

Nuno will come up against Lampard in a competitive game for the first time, having played Derby in a pre-season friendly a year ago when the former Chelsea midfielder was in charge at Pride Park.

The Portuguese has become the latest rival Premier League boss to back Lampard to be a success.

“From what I know and see from him is a very nice person, he has his ideas well and he’s trying to put them across in a good way. He has a fantastic squad, so tomorrow will be tough,” said Nuno.

“He was a fantastic football player and a very good young manager. For sure, he’ll be successful. I admire him a lot.

“We know Chelsea are a fantastic team with very good players, we know it’s going to be a tough challenge.

“We will have to be organised and compact without the ball, and then try to exploit the talent we have in our players when we do have the ball.”

Nuno confirmed that both Romain Saiss and Matt Doherty will be fit to face Chelsea.

Saiss, with it being between him and Jesus Vallejo as to who will replace the suspended Willy Boly in defence, is available despite returning early from international duty with Morocco.

Doherty could be involved even though he has been nursing a knee problem and underwent a “small” operation recently.

“Everybody is OK, with the exception of Boly who we cannot use. Everybody is ready to go,” said Nuno.

“Romain had a problem with his international team but he has been doing well, treating, so he’s an option. Matt had a small surgery, not related to football, so we’ll leave that confidential – between the doctor and the patient.”